Scott Brinker backs up his claim with some stark figures from market research company IDC. Their data show the significant shortfall in marketing technology investment in Europe. According to Brinker, it means that the EU is destined to lose out in the global marketplace.

In per capita terms, US businesses spend five times more on marketing technologies than their European counterparts. This means that European businesses are being left behind. 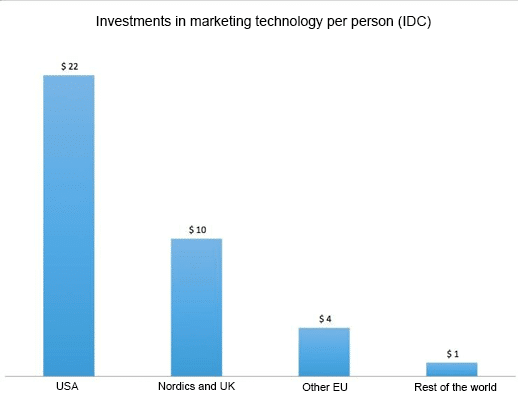 According to Gartner Consulting, in the United States and the UK, technology accounts for 27% of all marketing spend. Avaus Marketing Innovations estimates that the corresponding figure for the Nordic countries stands at 12% and 5% for the rest of Europe.

“Digital laggards are creating a severe marketing investment deficit, which ultimately leaves them very exposed in the global marketplace. The harsh truth is that technology-savviness very soon will become a matter of survival for most companies”, Brinker says.

Scott Brinker is one of the world’s leading marketing technology experts.

He is also the chief blogger at chiefmartech.com. Brinker’s latest bestselling title, Hacking Marketing: Agile Practices to Make Marketing Smarter, Faster and More Innovative, was published in the autumn.

Scott Brinker was the key note speaker at the inaugural Nordic Marketing Technology Summit. Organised by Avaus Marketing Innovations, the event attracted more than 200 leading marketers from across the Nordic countries.

“Data, content, processes and analysis will all continue to play an important role in marketing despite the ongoing digital revolution. However, technology is the engine that drives everything. Without it, we would not be able to make such extensive use of our own data, for example,” commented Emma Storbacka, Country Manager at Avaus Sweden and the event’s organiser.