We have tried to find some answers for what lies ahead for the marketing industry by putting Covid-19 in the historical context of three previous economic downturns; the Dotcom bust in combination with the 9/11 attacks in 2000-2001, the global financial crisis of 2007-2008 and the recession in Finland 1991-1993. Compared to its predecessors, the Covid-19 outbreak’s impact on future marketing spending and behaviour might be more significant.

We have analysed the effects of the two first events on marketing spending in Sweden and Finland. The recession In 1991-1993 was a uniquely Finnish phenomenon. For want of better industry statistics, we have used paid media spend as a proxy for overall marketing spend.

The events of 9/11 in 2001 were totally unpredicted, a non-economic black swan that amplified the technology company stock collapse effect on the financial markets. In hindsight, it had a relatively short disruptive impact on financial markets with a negligible impact on consumer and B2B demand, but a significant impact on marketing spend.

The 2000-2001 crisis was an atypical economic event as GDP was not affected negatively, while capital markets reacted strongly. Media spend declined by -9% in Sweden and Finland, respectively, partly due to the dramatic decline in the ICT-sector media spend. It took 5 years in Sweden, and 4 years in Finland, before media spending returned to the bubbly levels of the years before the crisis. 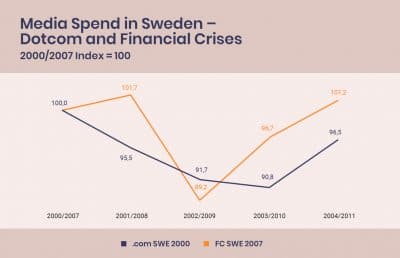 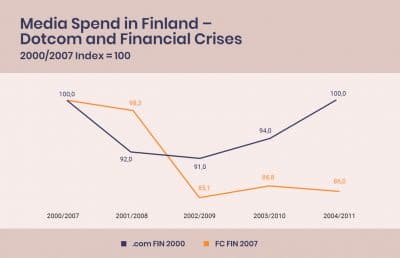 Following the Financial crisis of 2007-2008, GDP contracted in 2009 by -4,4% in Sweden, and in Finland by -8,3%. The cumulative decline in media spend was  -12% in Sweden and -15% in Finland. Media spend decreased in tune with GDP decline but multiplied with a factor of roughly 2. The media spend rebounded in Sweden after two years, but in Finland, 2007 pre-crisis levels have still not yet been reached.

Marketing investments have generally followed GDP growth with a lag of 2-4 years after a downturn. The exception to the rule has been Finland, where the prolonged period of zero growth 2009-2018 led to a long decline in marketing spend. Consequently marketing spend in Finland was still in 2019 still substantially below the levels of 2007 (-7%).

The latest available forecasts for coronavirus GDP impact in Sweden and Finland are between -3% and -6% (KI, PTT). The economic downturn in 1991-1993 was aggravated in Finland by the loss of 20% of its exports due to the collapse of the Soviet Union, its primary trading partner. GDP declined during three consecutive years by a total of -11% (Sweden -4,4%) while domestic consumer demand declined by -20%. Simultaneously, paid media dropped cumulatively by -27%. Thus marketing spend tends to decrease with a multiplier of 2-3x over the fall in GDP, depending on the severity of a downturn.

The multiplier effect is a consequence of companies needing to adjust to a fall in revenues, which is commonly a multiple of the reported GDP change. The sensitivity of revenue change is what is generally referred to as the cyclicality of the firm or the industry.

Adjustments mean saving costs. Sourcing and other variable production costs decline in line with revenues, fixed costs are resistant to decline, which leaves a limited range of other more discretionary spending for management to address. Typically Sales & Marketing, together with Research & Development, make up a significant portion of the discretionary spending items.  In a time of demand weakness, it is almost inevitable that adjustments focus on marketing expenditure. The opposite applies when revenues increase.

Budget items will be unevenly affected

We can assume that as an effect of the Covid-19 induced downturn, overall marketing spend could decline for 2-3 years, with a cumulative drop of 15-20% in Sweden and 20-30% in Finland. If GDP decline is less than 5%, the marketing budget savings are likely to be closer to the multiplier of 2x over the GDP fall, but If the GDP decline is 10% or above, the multiplier will be approximating 2,5-3x over the GDP fall.

The decline will affect different budget items unevenly. Based on the previous analysis of marketing allocation trends, researched by Avaus, the present budget trends will continue. Growth items such as Data & Analytics, Social & Search will fare better than previously declining items such as traditional Below-the-line activities (DM and Telesales). The downturn will, therefore, reinforce the prevalent trends of growth in data, analytics and digitalisation. Agency fees and marketing personnel costs have grown rapidly during 2015-2019. They have been significantly culled during all the three downturns described and this will most probably happen again.

Our forecast of the Covid-19 outbreak’s effect on marketing budgets: 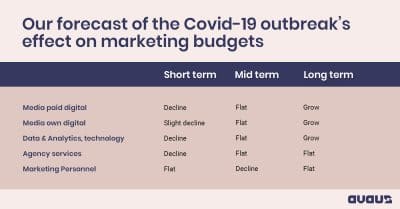