Finnish MarTech Landscape update 2019: A 300 Million € Business with 71 New Companies on the Map

A 300 Million € Business with 71 New Companies on the Map 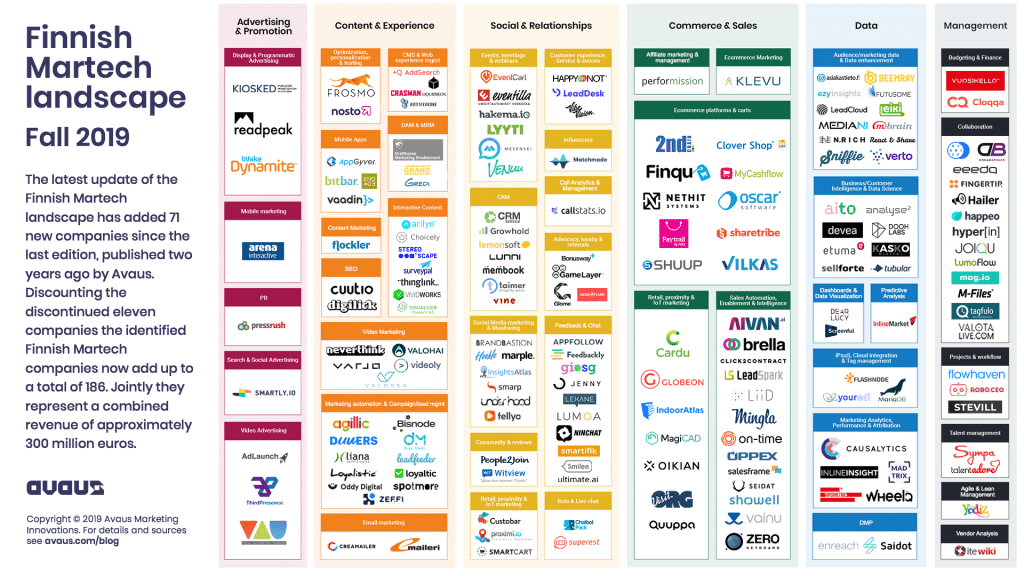 The latest update of the Finnish Martech landscape has added 71 new companies since the last edition, published two years ago by Avaus. The Finnish Martech plays now add up to a total of 186. Combined they have revenues of approximately 300 million euros.

Two years ago Avaus presented the first Finnish edition of the famous MarTech 5000 landscape originally made by Scott Brinker, charting marketing technology on a global scale. Now we have returned to it, with an updated and more comprehensive map of the Finnish martech scene.

In 2017, the global landscape contained a total of 13 Finnish companies out of 4381 companies providing 5381 solutions. Since then MarTech 5000 has grown to a total of 7040 solutions in 2019 and now includes 25 Finnish martech solutions.

Now our updated 2019 edition of the Finnish martech landscape features over 70 new entrants. Eleven companies have been taken off due to them discontinuing their martech solutions or running out of business altogether.

The expansion of the Finnish landscape is primarily attributable to better coverage of our research, rather than a real expansion of the landscape. Our access to founding year data has been limited and it is possible that some data is still missing. 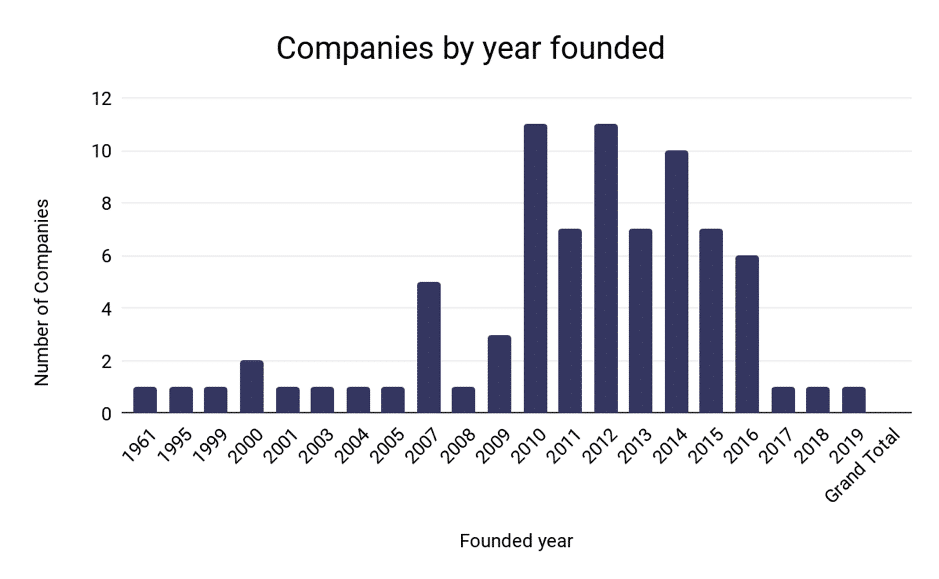 Of the 119 companies that we have historical revenue data, 53 are showing double-digit revenue growth, and 45 growing their revenue by even greater rates. Only 17 show negative and 10 neutral revenue development since our last edition came out in 2017.

With a landscape consisting of young, and by inference small, companies, relative growth measures display impressive numbers, even as absolute revenues are fairly low. Over half of the companies that we have employee data on (n=158), employ ten or fewer. The biggest players are established companies in publishing, software or data management, that have diversified into solutions fitting the marketing technology landscape. 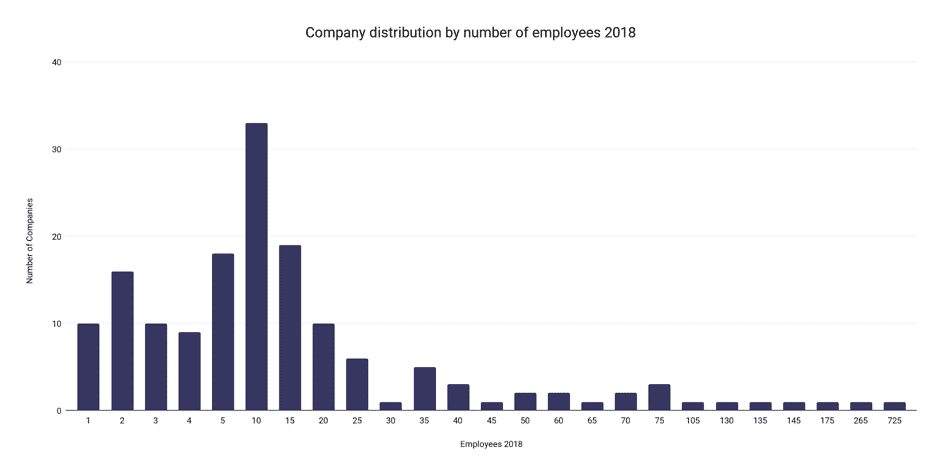 The combined 2018 revenue of the 146 companies we have data on, amounts to €466,316,000. A crude linear extrapolation to cover the entire landscape puts us at €606,849,589 for 2019. The companies with lacking data are likely to be from the smallest end of the spectrum (although we do lack employee numbers for them to corroborate this). Also, as several of the largest companies primarily derive the bulk of their revenue from other business areas than their martech solutions, they skew the picture significantly. We might also have overlooked quite a few companies that would belong to the martech graphic. Correcting for these points, our rough estimate of the combined 2018 revenue of the Finnish martech landscape is in the area of MEUR300.

The distribution of Finnish martech companies mirrors the global 5000 martech quite closely. The most notable difference is in the category of Advertising & Promotion, where Finland have relatively few representatives,

A likely explanation to this is that Finland is one of the smallest digital advertising markets in a global perspective, both relatively and absolutely. Finnish online ad spend amounted to only USD 529M in 2018. That amounts to a per capita spend of USD 96 as compared to USD 204 in Sweden (sources: Statista largest online ad spend, Statista digital advertising Finland, Worldpopulationreview.com).

Still, when correcting for companies with significant revenue from other business areas than martech, the companies in the advertising & promotion category account for a disproportionately large share of the total revenue with 15% of the total revenue derived from these adtech companies accounting for just over 5% of the landscape. It is very likely that this reflects adtech business models that typically build on taking a cut out of total ad spend.

The number of companies isn’t a perfect measure of quality, but looking at the Swedish MarTech Landscape that we mapped in 2018, it’s hard to overlook the overweight in commerce & sales, driven up by the growing Swedish fintech sector. For countries as small as Finland and Sweden, exceptional strength in a specific area seems more likely to succeed than a generalist one on a globalised playing field.

Our analysis of the German MarTech Landscape, showed that in the global market of digital services, local presence can be a strength, thanks to the improved possibilities for face to face service in local language. But, the Finnish market is not nearly as big as the German and as martech gets ever more commoditised the competition will become ever more globalised.

Looking for a Finnish Martech edge on the global martech playing field we suggest AI. Finland, “Europe’s No. 1 laboratory for AI”, as reported by Politico, to great extent thanks to Elements of AI, might well have an ace up its sleeve after all. A total of 102 out of the 186 companies listed indicate on their websites that they are using or developing some form of AI functionality. We believe the Finnish martech scene might indeed have an edge here looking into the future.

Taking a look at the current state of funding reveals a grand total of €383,754,916 funding going to 53 of the companies in our list by a total of 108 different institutions. 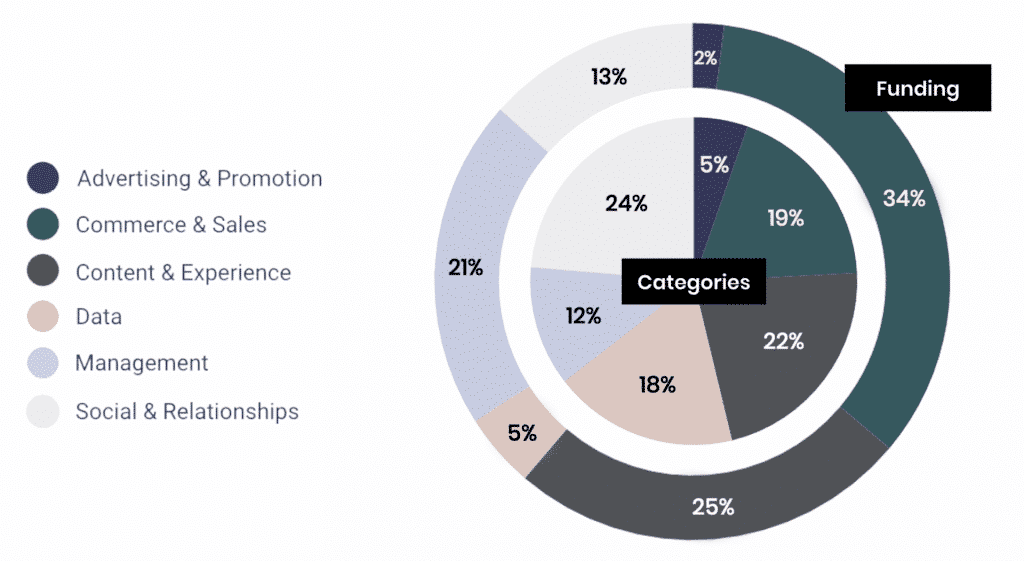 We have funding data on only 86 companies and conclusions must therefore be cautious.

The largest total investments, €131,071,582, 34% of the total, have been received by companies in the Commerce & Sales category, while they represent only 20% of the landscape. In terms of funding rounds, companies in the Data category have attracted the largest number of investments, but comparatively modest sums. The management category, on the other hand, has attracted a smaller number of bigger investments. This category is also relatively large in comparison with the global and the Swedish landscapes. These should be companies to keep an eye on in the future. 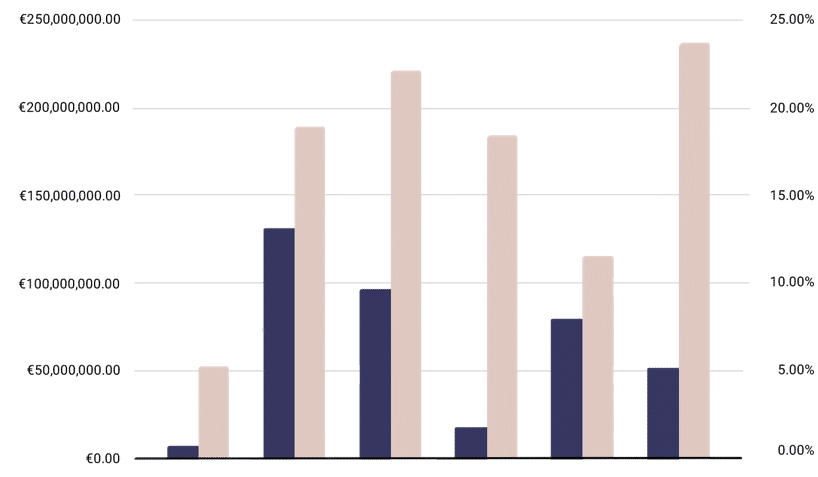 Top investors by number of companies funded. The spread of institutions is large with only a handful, funding multiple companies covered on the landscape. These more active investors are heavily dominated by state or EU owned players.

From a funding perspective, 2018 was a good year for new Finnish companies overall. Early stage startups received an unprecedented total of 479 M€ in funding: almost a third more than in 2017. This continued a trend of growing investments, which relative to the GDP positions Finland as #1 in Europe. Still, Finnish funds rank below the average European size, and roughly 60 percent of the total amount stems from foreign investors. 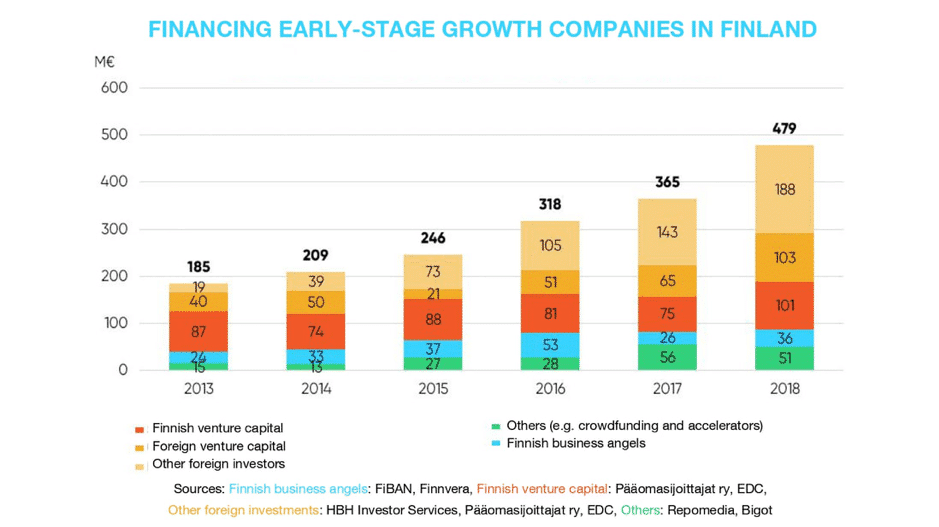 A few martech stars stand out from the rest deserve our special attention. These are pure-play marketing and sales tech companies who have demonstrated significant revenue growth both in relative and absolute terms since our last edition of the martech landscape. Social advertising automation tech provider Smartly.io is the leader (32 M€ in revenue 2018)  It has received recognition for it also by Kauppalehti, ranking it at #57 of the 100 fastest growers in Finland 2019. They are followed by eCommerce personalisation solution Nosto (9,4 M€) and marketing metrics solution provider Supermetrics (6,2 M€) and), who both stand out among the others in the landscape but still lag behind Smartly.io quite a bit in terms of absolute revenue growth. Klevu (1,7M€) Vainu.io (0,8M€) and Quuppa (8,9M€), listed on our landscape can also be found on Kauppalehti’s top 100 list.

Finally, we want to give a big shoutout to Henri Syvänen (@syvaenen), who paved the way compiling the first Finnish martech landscape.

This is only our own approximation of the landscape, an ongoing project towards completion, and, as such, it may contain some errors. If you spot changes you’d like to be made, or would like to suggest additional companies, we welcome you to fill out this FORM and we will consider it in future iterations.