A business framework for COVID-19 response and adaptation

When the operating environment changes rapidly, as it has presently, our ability to make informed decisions is challenged. We have less information than before, and the information that we do possess has less and less value as unpredictability increases dramatically. Therefore, the margin of error also increases dramatically and businesses risk both inaction or false action.

Managing the information flow requires the ability to structure the information in a new framework.  Otherwise our personal, as well as the enterprise cognitive functions, risk being overloaded by the information noise level and the high volume of day-to-day issues that acutely need resolution.

The response framework we propose has 5 key elements:

Those companies best able to adjust, including learning to work digitally at a distance, will survive and find opportunities for significant gains in market share.

Consider that the environment in which your firm operates is a system.  A boundary for the system could be the industry or sector, but this is less important than the fact that the system has three distinct states:

Our system has previously been in a dynamic equilibrium, allowing controlled operations, predictability and linear change within relatively narrow bounds (tomorrow is likely not much different from today).

The COVID-19 pandemic has now tipped the system out of equilibrium.  It lacks predictability and change is no longer limited to narrow bounds.  Tomorrow will bring many more surprises, and outlier-outcomes are suddenly normal.  We will call this the crisis state, which has unfortunate characteristics of chaos.

At some point, the current turmoil will end and the system will again find equilibrium.  Daily routines will be re-established, business will return to as-usual, and there will again be predictability and a sense of control.

These three phases are distinct and the business response should be adjusted accordingly.

The situation now becomes more manageable, as we have two objectives which can be assigned to two teams.  One team should focus on managing the firm through the crisis, another team should focus on preparing the firm for the new equilibrium, the new normal.  Crisis and stability require different mindsets, skillsets and actions, which is why the two objectives should be addressed separately.

Team 1 is the crisis team or the blue-lights brigade.  This should likely be led by the CFO and be given emergency powers to override existing management structures.  The primary purpose of this team is to ensure the survival of the firm through the crisis with a minimum depletion of resources.

Team 2 should focus on preparing for the new equilibrium; creating a hypothesis of what the new normal will look like, preparing and executing a preparedness plan and ensuring the company is in a position to best address customer demand as the crisis begins to abate.

These teams do not need to overlap.  In fact, they likely should not overlap to avoid dilution of purpose.  Both teams should report to the CEO, but the crisis team should not require CEO pre-approval for initiating action.

The CMO’s team is likely to participate in both efforts as the firm needs to manage two challenges: communication and customer engagement through the crisis, followed by defining the new forms of engagement that should be prioritised thereafter.  These obviously cannot be assessed independently, but rather in conjunction with the other financial and business priorities of the firm.

Making sense of the world

Evaluating and dealing with the situation as three distinct states creates the ability to describe the new states separately and to craft responses to them separately.

An example of a state description is below. 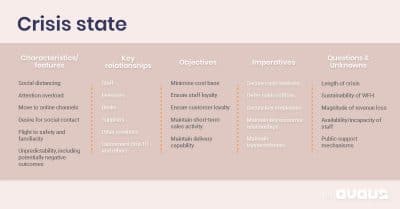 A detailed description of the three states, former equilibrium, crisis and new equilibrium, creates an information framework into which daily data-points and insights may be added.  The purpose is naturally to improve the ability of the organisation to formulate and execute the action plans required by the different states.

Much of the description may seem obvious and the core of the action-plan self-evident.  But in these circumstances it is more important than ever, to have a sense-making mechanism that is able to incorporate and process the incoming information efficiently.  The purpose is to maintain a high quality of decision making and to keep in mind that actions must always have an objective. Furthermore, the structure supports good governance.

A comprehensive description of the new equilibrium will likely involve a similar description of key related systems.  Customer industries will be affected by the crisis state in radically different ways and therefore timelines and consequences for the new equilibrium will vary significantly.  Yet, these systems are interdependent and typically need to be considered in the context of each other.

Hospitality and travel industries will likely see the largest financial disruptions, while utilities may experience significantly less turmoil but are far more consequential if they were to fail, say due to qualified personnel becoming incapacitated.

The description of related external systems (sectors, groups, etc.) may also be useful for the crisis state if there is an opportunity to do so.

The emergency responses must start from the needs of the firm itself, but the more they reference and take into account the needs of customers, personnel and other stakeholders, the better.

The new post-crisis equilibrium will be related to the old one, but it will not be the same and we should avoid unfounded assumptions or expectations.  It is likely that the new state will reflect the following three elements:

The starting point is the former equilibrium. During the crisis, it is likely that existing megatrends will have been accelerated as resistance to change breaks down in a crisis.  And, some characteristics of the crisis state are likely to have persistence. 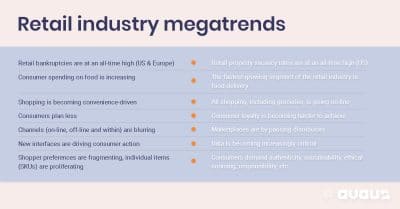 Certainly, it is possible to identify and list individual aspects of the future state on an ad hoc basis.  But, to generate an overall view and assessment of the situation will require a framework that connects the individual elements.

We can generalise two persistent post-crisis characteristics: firstly, after any crisis the balance between resilience and efficiency shifts in favour of the former.  In other words, customers, employees and other parties are likely to prefer behaviour that emphasises resilience, even at the expense of efficiency. Secondly, the explicit or implicit risk premium applied will be far higher than previously, leading to a strong prioritisation of near-term outcomes over far-out outcomes.

The generalisations are valid but need to be contextualised and related to other system characteristics, objectives and imperatives in order to lead to meaningful actionable outcomes.

It does not matter if the future description is not perfect. What matters is the ability to process information, adjust operations and to put the firm in a position to offer propositions that customers will find relevant in the new environment.  Customer needs and preferences should not be expected to be the same pre-crisis and post-crisis. If this requires changes in the competencies or resourcing of the firm, then these are issues that need to be highlighted already during the crisis period.

A historic example of a state change is the financial crisis of 2008. In 2009 Finnish GDP declined by -8.3%. This resulted in a drop in marketing spend of -17%. The effects were long term and the overall marketing spend since then, has not returned to 2008 levels, despite the economic recovery in Finland.  Overall spend on bought media continued to decline from 2008 to 2016 despite the rapid growth of digital media. Agency spend declined from 2008 to 2013.

Despite these headline figures, digital own-channel service development, and spending on digital content, services and Martech surged. In other words, the chaos period following the financial crisis resulted in a long period of substantially lower marketing investments and a rapid, permanent shift towards own digital channel development. This trend prevailed until 2014-2015 when the present strong trend of growth in marketing Agency services began.

An outcome of any crisis, as was the case post-2008,  is that industries typically see a polarisation of survivors.  The largest and financially best-resourced firms together with the small, most innovative and cost-resilient firms will survive the crisis, while many mid-sized players will struggle to adjust their operations. This creates new opportunities, as was the case in the last recovery.  Understanding and responding to these opportunities is not a given but it is helped by creating appropriate structures for sense-making already now.

Ultimately, though, what matters is who exits the crisis with a high level of trust in the eyes of both customers and employees.  This will be accentuated by the lingering emotional response of both groups which we must not overlook in the jumble of data points that will now preoccupy us.